We are pleased to announce that the FileOpen Viewer for Android is now freely available in Google Play. The new FileOpen Viewer app will enable licensees of FileOpen’s suite of DRM solutions to share documents securely with end-users on Android devices such as the Google Nexus, Motorola Droid X, and Samsung Galaxy; in addition to Apple iOS devices such as the iPad and iPhone.  We will continue to support users on Windows 7, 8, Vista, XP; and Mac OSX, 10.5 or later.

Leveraging FileOpen’s core document security technology, the new FileOpen Viewer for Android not only protects files from unauthorized sharing, but also enforces granular access controls such as document expiration, saving of local copies, and the imposition of user-specific watermarks. The app operates in essentially the same way as the FileOpen plug-in for Acrobat/Reader, authenticating each open and print command with the publisher’s server. When permission is granted, the FileOpen Viewer for Android displays the document, which can then be used according to the permissions set by the publisher.

Documents accessed by the FileOpen Viewer  for Android are encrypted with industry-standard 256-bit AES encryption, and cannot be opened by users without explicit permission from the publisher’s server. Authentication may be linked to a session login to the publisher’s server or device registration, which can be emailed to the user.

This expansion of FileOpen's product line advances our mission of enabling secure document distribution to the broadest possible range of devices and platforms, maximizing security for our customers while reducing end-user hassles and tech support issues.  For more information please read the full press release or check out the FileOpen Viewer for Android Web page. 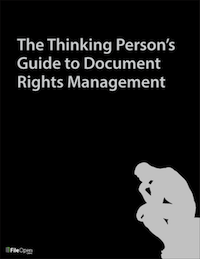