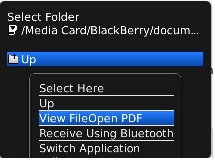 for Blackberry™, the first of several implementations of our software for handheld devices. This product release is the first example of general architecture that we expect will permit the expansion of the FileOpen footprint to include a variety of devices and systems. The key idea behind this design can be summed up as “Adapt to the incumbent viewer.”

This is not a new idea, of course: FileOpen has always adapted to the incumbent PDF viewer on the PC/Mac/Linux platform, which is Adobe Acrobat/Reader. However, there currently is no Adobe Reader for Blackberry™. Adobe has released a viewer for the Android OS, which also uses the Java language, so the possibility exists that we’ll see an Adobe Reader for Blackberry™ in the near future. At the moment there are two incumbent viewers on the BlackBerry™ platform:  BeamReader (www.slgmobile.com) and RepliGo (www.cerience.com). Neither product is free (both cost about $15 for a perpetual license), but both do a good job of rendering a PDF entirely on the local device.

Our initial intent had been to create a “FileOpen PDF Viewer” for the BlackBerry™, i.e. to display documents in our own application. However, as the development got underway we discovered that the BlackBerry OS doesn’t permit more than one application to be registered for a particular file type, so if we were to deliver a FileOpen PDF Viewer any user who installed that application would be forced to use it to display all PDFs (even those not encrypted by FileOpen). We could also have changed the file extension from PDF to something else, but doing that violates some of our core design principles (we work with native formats) and doing so for only one device would be a recipe for end-user confusion.

Even if we could, FileOpen Systems has no desire or incentive to displace the incumbent players in the BlackBerry™ PDF viewer market, or even to favor any single player over any other. So we decided on an approach that would allow our application to work with any and all viewers that support the required Java Mobile Edition (JME) functions for interapplication communication. On BlackBerry™ devices where a compliant PDF viewer is present, PDF files encrypted by FileOpen can now be authenticated and modified by our application, then opened and displayed in the incumbent viewer.

Going forward we think this approach will simplify the development of solutions for other handheld devices. Look for more announcements in this space in the coming weeks.

Find out more about FileOpen Document Control for Blackberry™

Request a 30-Day Free Trial of FileOpen Document Control for PDF and Blackberry™!